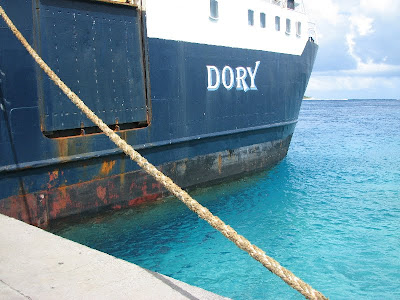 Even though I lived on Ahe Atoll for five years I had never taken a supply ship all the way out to the Tuamotus from Papeete, so two Christmases ago my then 11 year old daughter and I decided to take the adventurous three-day voyage on the good-ship Dory (which unfortunately no longer takes passengers - for a list of boats that do see my other post How To: Travel French Polynesia by Supply Ship) from Papeete to Ahe via Tikehau, Rangiroa and Manihi.

First, take note that I am the most seasick person in the world. I get sick in cars, on airplanes and even, embarrassingly enough, on the Moorea ferry. But I love the idea of boat travel and if it weren't for my terrible tummy I would have probably sailed away long ago. My daughter fortunately has her father's steel Viking gut so I knew, in the worst case, the tables would turn and my little girl could stroke my back while I dry heaved over the side. 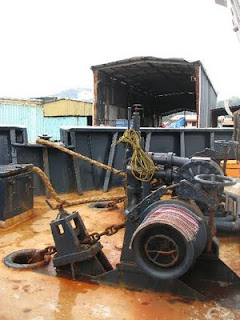 Making matters worse, the supply ships stink. Diesel fumes linger even if the boat has been at dock for several days, black grease coats the railings and pools in corners and a all-encompassing layer of accumulated salt makes everything permanently sticky and damp. We bunked in an empty container with windows and doors cut into it, along with two other Tahitian guys on their way to work on a pearl farm. The ship's crew didn't really pay us much attention over the three days but they did let us into their quarters so we could use their toilets and once (and this was a truly decadent moment), the shower. Meals were up to us although we had no cooking facilities. We brought fruit, crackers, pate, peanut butter and granola bars, which ended up being plenty. 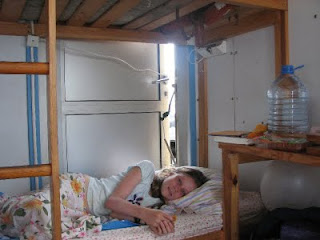 Well-armed with Bonine we set sail late afternoon and spent the first night sleeping, or sort of sleeping, while being hurdled back and forth within our beds by the rolling sea. It started to rain and a slight stream of water began to leak onto my head. I moved around so my head was at the other end of the bed which was much better even though I had cold wet feet all night. My daughter was luckily on the bottom bunk and stayed nice and dry. Maybe it was the fact that I had something else to worry about besides being sick, but the next morning, even though I was cold and sleepy, I actually felt OK. It was a full day at sea, not as rough as the night and I found if I just stayed in bed I didn't get too sick. My daughter read and played checkers with the other two guys in our room. Night came and we slept again, more peacefully this night till we felt the boat stop and the anchor drop into the Tikehau lagoon.