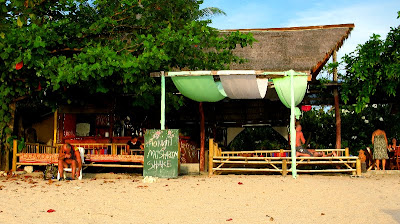 She was around six foot two and skinny in a way that comes from ill-health rather than from exercise or lucky genes. The light bruises on her arms told me drugs were probably to blame and the poorly drawn eyebrows, thinning short blond hair and stubble on her chin told me she was less worried about personal hygiene than your ordinary transvestite. But she had an effervescent smile, and my spider senses told me she was a nice person.

"Oh the tuk-tuk's a great deal, best on the island, but it's for two people and you have to drive it yourself and there's really no point if you're by yourself," she told me in a fast, nasal, up and down drawl.

I had just stopped by to ask about a sign outside her door advertising a cheap rate on a tuk-tuk. This was on Ko Lanta in Southern Thailand so I had expected to meet a Thai person, not an American cross-dresser. I was still a bit taken aback.

"Where are you from?" I asked for lack of anything better to say.

"San Francisco and LA mostly. And you?"

"I grew up in San Francisco." I said.

"Really? Wow I haven't met anyone from home in ages. Do you want to come in and have some tea?"

Maybe it's because I'm from San Francisco and used to the freaks of the world, and I'm usually quite cautious when I travel alone, but I was intrigued by this person so didn't hesitate. In we went for tea.

"By the way, my name's Dok Mai which means flower in Thai," she told me, so I told her my name too. She smiled at me in approval.

Her home was on the ground floor of a shabby mixed commercial and residential block with a big parking lot in front. The floors were cheaply tiled and a stand up fan was blowing on a synthetic-upholstered floral couch. Along the wall were a few professional looking guitars. There was a lot of space and little furniture.

She brought us tea in a flurry of apologies for the state of the house, which was a little sloppy but mostly clean -- then she wasted no time to start talking, as if she hadn't spoken to anyone in months.

"Let me tell you about me," she said.

This made me happy because I wanted to know about Dok Mai and I was get tired of talking about myself with every new person I'd been meeting. Sometimes it's refreshing and relaxing to just get get talked at by another person without having to go into your own story. I was however a little worried about how long I was going to get stuck listening.

First Dok Mai told me about how she had run away from California because she had racked up a $1000 per day coke habit she wanted to leave behind. A friend suggested she get away from her problems by going to Kata Beach on Phuket, so without doing any research Dok Mai bought a ticket. She loved Kata more than anywhere she'd ever been but then someone told her about Ko Lanta, she went to visit and found she liked it even more than Kata. She'd been there ever since.

"I'm a musician you see," she said about ten minutes into the story. "Have you ever listened to KROQ in the Bay Area?"

"Wait isn't that an LA station?"

"Have you heard a song called You Want It You Got It?"

"Someone told me they still play it. Here I'll sing it for you."

She went and grabbed an acoustic guitar and began strumming. She cleared her voice, then out came a sound I had not expected. The tune had real soul, a universal appeal and her playing was flawless with a hypnotizing style. But it was her voice that was the most astounding. Imagine Aretha Franklin meets Boy George trying not to wake the neighbors. What I was suddenly watching was pure talent, that thing that performers search for their whole lives and rarely find, and this was just in a living room. Dok Mai was absolutely mind-blowingly good. I can't imagine how beautiful she'd have sounded on stage.

She finished and I applauded as enthusiastically as I felt. I was also pretty sure I'd heard the song before.

"That was amazing!" I said.

"I'm playing in a cover band at the Somewhere Else bar tonight if you want to come?"

I did want to see her sing some more so told her I'd try and make it but that I had to go.

"Come back any time," she said as I left. Her eyes were a little glossy and she seemed a bit more out of it than when I had first arrived. I wondered if she hadn't taken a hit of something while taking the tea dishes back to the kitchen or something. Despite the awesome show, I was starting to feel uneasy - I was happy to be getting out of there.

When I got back to my guesthouse that night I saw Dok Mai sitting at a table at the onsite bar. Whether she had come to find me or not I don't know, but the fact she was there resurrected that uneasy feeling; I slipped into my room without her seeing me and didn't come out till she left about a half hour later. I'm not sure what I was worried about but despite her artistic brilliance something had gone off and I didn't want to get in any deeper with Dok Mai than I had already. Her show was at a beach about 45 minutes away and I didn't have a car or the expensive taxi fare, so that cinched my decision not to go. I never saw her again.

Since, I've tried Googling "You Want It You Got It" to no avail. It's a great song but I don't even know what name she had when she released the song. I hope that Dok Mai is continuing to find her peace on Lanta, however she chooses to find it. She is a nice person, just perhaps with more baggage than most people, myself included, can deal with. Maybe next time I go back I'll get to see her sing on stage. I know she won't remember me so I'll just keep my distance and enjoy.

Stuck in a Tunisian Restroom 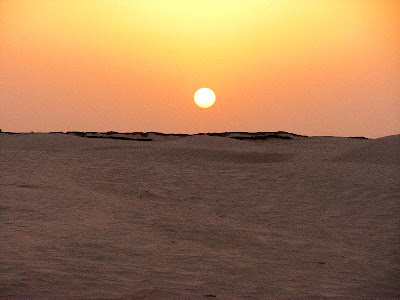 I've been lucky on my travels not to have run into to serious trouble. One of the more laughable situations I've been in was getting stuck in a bus station restroom in Tunisia with my 12-year old-daughter, Jasmine. We could have been in there for hours if she hadn't saved us.

We had just taken a several-hours-long bumpy and dusty bus ride from Le Kef, in the north, and had arrived to transfer in Gafsa to get to our final destination of Tozeur. Needless to say we had to pee. Badly. So my husband and son watched our bags while Jasmine and I set off to find a bathroom.

Gafsa is a transportation hub so there were what seemed like hundreds of people darting to catch their bus or waiting for one in the extreme dry heat. The whole station was covered in a sticky black film from exhaust, desert dust and dirt from people's shoes. It smelled slightly like a burning tire.

We navigated past a staircase and around a few corners, all eyes on us as the only white people, till we found the ladies room. By this time we really had to go. The door was wide open so that anyone walking by could look into the stalls so I absent-mindedly kicked aside a small brick that was holding the door open for some privacy. We were the only people in the bathroom, which seemed strange.

We visited the stalls, washed our hands then went to the door to leave. There was no knob. I pushed on the door. It didn't budge. I tried to pull the door from the broken knob mechanism. No go. Hmmm. I checked the locking bit where the door connects with the jam and could see it was well and truly locked. Without some sort of tool, we were screwed.

Just as I was about to start banging on the thick, probably sound-proof door and yell for help, Jasmine pulled her Swiss Army knife out of her day pack. I didn't even know she had brought it with her.

"I'll get us out, " she said confidently as she sprung out the tool she needed, stuck it in the knob hole, turned it and opened the door.

I guess there's a time when a parent sees that their kid has grown into a capable individual - and perhaps cooler and smarter than they are - but I have to admit I never expected this to happen in a stinky public restroom near the Sahara.

And she helped me remember something I already knew: carry a Swiss Army knife because, like dental floss and duct tape, it can fix things, save you or even impress your mom.