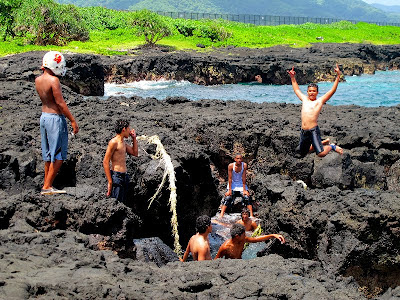 I had low expectations of American Samoa. By all reports it was full of fast food chains and everyone was fat and unhealthy. I had images in my head of unsmiling people with most of their culture over-run by mini malls. I have never been so wrong about a place.

The above photo summarizes what I saw in American Samoa: A Polynesian island with beauty to rival Bora Bora and a culture as alive as in independent Samoa next door -- but with a touch of the USA. Yes there are some fast food places but these are overshadowed by the silky water of Pago Pago Harbor, the green jungle-covered mountains that frame everything and the blue water that you can see from almost everywhere. Kids like these in this picture aren't inside playing video games, they're launching themselves into a current-filled pool of jagged lava for fun. That's cool.

The most blatantly American thing about American Samoa I saw is their love of US football. The nightly news showed clips and results from the high school teams and when the NFL playoffs were on (as they were when I was there), a conversation couldn't be had without a few words about which team you were rooting for. This picture wouldn't have been what it is without that kid in his helmet.