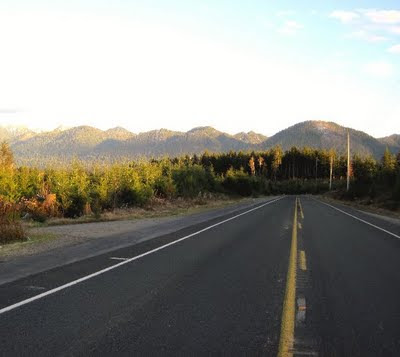 When you live on a small island there's no such thing as a road trip. Driving as far as you can around the two parts of Tahiti's figure eight takes four hours. One reason I wanted to move back to the States was to regain the sense of unlimited space that you can only have on a continent. Landlubbers who grow up with the amount of land Americans take for granted are pre-disposed to get a small dose "island fever" when dropped on a dot in the middle of the ocean. Some people get over it, I never did.

I was reminded of this last Friday when my good friend Dave came to town. Dave is one of the most interesting travelers I know. Growing up, his dad was a Greyhound mechanic so Dave had free bus tickets anywhere Greyhound went. So Dave would take off for weekends or sometimes weeks, riding buses to wherever he felt like going. He met crazy people, geniuses, pretty girls and wanderers and lived off hotdogs and potato chips. As he got older he learned to hop freight trains (he's the only person I know who has really done this) and once he got his own car he became a truck stop aficionado, driving around the States, always on the side of a blue-collar reality. By the time the two of us became friends in our early twenties he'd been to most US states, could tell you strange details of any Greyhound bus station in the nation and had the stinkiest, ugliest little brown car you ever saw ( it had a mouse living in it named it Rudyard).

So it's no surprise that my most memorable and real American road trip was with Dave - we just took off last minute with no idea where we were going.

We started in San Francisco, went north and our first stop was a truck stop near Vacaville. About 90 percent of the patrons in the vinyl-clad parking-lot-sized diner were men, big men in hefty plaid shirts with heaping plates of meat and potato-looking meals in front of them. It was so stereotypical it was nearly shocking. The waitresses had big hair and were probably in their late 40s, every booth was full of chatting big voices or silent loners bent over their pot roast and peas. No one took any notice of Dave and I as we took a booth and ate bacon, eggs and biscuits in gravy. It was like a scene in a movie.

We took similar stops farther north, through Truckee, where we stayed at a friend's place and played in the snow. The next day we went to Reno and Dave taught me the art of playing penny slots - play for pennies and get free booze from the cocktail waitresses who are there to get you drunk so you make bad decisions. I think we worked up to the nickle machines at some point but that's as loose with our cash as we got.

Reno was sharply cold and sadly empty. The half-blinking neon signs and desperate gamblers further painted the gloomy, seedy atmosphere. We ate all you can eat $1.99 buffets and tried to sleep in the stinky car but it was too cold - so we got cheap rooms at Circus Circus.

The next day we headed deeper into Nevada, past whole towns of trailer homes, flat streets with nothing higher than the electric poles and tawny, desolate mountains in the distance. We chugged up to Virginia City, went into a bar where a decent blues band were playing in the middle of the day then went to a cafe next door and drank sarsaparilla with views down the sandy mountain. Then we headed back over the Sierras to the pines and majesty of the forest. This was America, the same America you see in Tarantino flicks, the underbelly of vast spaces, un-glossed and untamed. It's something you can't find anywhere else in the world.

Years later I yearn to make another cheapskate road trip like the one I took with Dave but now I'm older, have a real job, two kids and a busy life so I'm not sure when I'll fit it in. But the road is still there, just waiting for a full tank of gas, and knowing that makes me happy.

Southeast Asia: What NOT to Wear 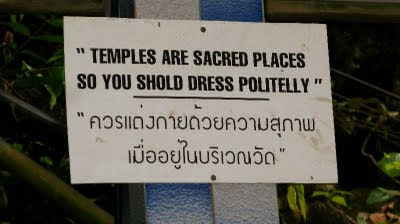 Say you're in your hometown - be that New York, York, Melbourne, Madrid, wherever - and an obviously foreign couple walks by. The very hairy, pot-bellied man is wearing a loincloth with his butt fully exposed and the over-weight, saggy-buxom woman is wearing nothing but a few stripes of neon yellow body paint. The couple walks into a church, stomp in during a service, walk around without smiling and start snapping flash pictures. Are these people cool in their expression of their individuality and are they groovy ambassadors for their culture? They're a bit of a freak show perhaps but not much more.

To a Muslim man in Kota Bahru, Malaysia or an old woman selling fruit at a Thai Wat, this is about what it looks like when foreigners, the guy perhaps with his shirt off, the girl in short shorts and spaghetti straps, come through and tromp through their religious sites like they're a 7-11. Usually I keep quiet about what I think of people's travel style, but these types of travelers seem to be taking over the region more and more - in turn the locals start to dislike tourists and see them only as a depressing means by which to earn a buck. 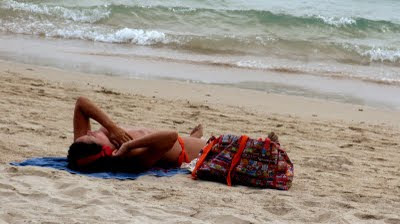 During my last trip to Thailand I saw countless topless sunbathers on Muslim beaches, bra-less women wearing see-through tops while walking around conservative market towns and shirtless men walking around town. The most depressing moment was at Wat Tham Seua near Krabi Town where nearly every tourist I saw (and there were around 35 to 50 of them) was wearing shorts, tank tops or no shirt at all. Signs had been posted asking visitors to dress conservatively but no one seemed to notice - and of course a monk isn't going to come up to some couple dressed for the beach and give them a piece of his mind. Over and over again I wonder, what are these people thinking? Why do they travel so far only to disrespect the people in the country they're visiting? If they came to party why couldn't they just stay in Patong? And I'm not whining or yelling these questions, I really want to know. I'm stumped. 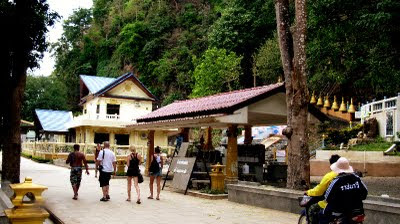 If you're reading this you're probably the type of person who would think to cover up before entering a foreign place of worship - or at least I hope you are. So thanks for listening to this rant. And if you have any ideas of how to ease this ballooning problem, please leave your comments. Also please share any thoughts you might have. I've heard people argue that they think they should be able to wear whatever they want wherever they want - you know freedom and all. But I'm a staunch believer of travelling light in all sense of the word including my impact on a culture.

PS: My paparazzi photo skills aren't tops but these are all photos from my last trip to Thailand.

Actually, I won't try the live octopus: a lesson in Korean cuisine

Every traveler has that one end-all-be-all thing that tops the list of the most horrible foreign delicacy they can imagine eating. Giant cockroaches were my topper until last March when I went to South Korea and discovered a dish far more distressing.

I was on my way to Thailand and took a three-day stopover in Seoul for fun. A friend put me in touch with Daniel Gray who runs a Seoul nighttime eating and drinking tour (that's so phenomenal it's worth several articles and blog posts, but I'll have to get to that another time) and I lucked out that he was available to take me out last minute. Now I'd heard about Koreans eating live octopus and had a (soon-to-be-proven-false) idea that the creatures were teeny, tiny squirmy things that you'd pop into your mouth like a wriggling grape or cheese puff. Thinking this was my chance to try something really weird and possibly tasty, I asked Dan if we could go to a place that served the live critters.

"Well it's funny you asked," he said. "Because I just took some people to eat some this morning. Let me show you the video."

I don't have Dan's video, but what he showed me on his phone looked a lot like this - but not sideways:

That might have been enough to talk me out of it but then Dan added the cinching detail: several people per year die from eating octopus this way. The tentacles, still moving whether dead or alive, search for escape - something to latch onto - and the nearest something in your mouth is your windpipe. Yup, they can strangle you from the inside. Now seriously, no sushi I can think of is worth risking my life for and a live octopus could only be slimy and chewy - let alone still moving. No my kids won't have to explain to their friends that their crazy mother got suffocated by eating a live octopus in Korea, no matter how much street cred that might garner.

And that is another story.
Posted by Celeste Brash at 1:12 PM 4 comments: