Notes from the Heiva 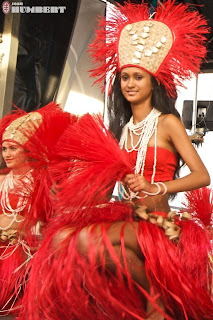 French Polynesia's biggest festival is the July Heiva when all the best traditional dancers, singing groups and athletes get on stage and show everyone what Tahitian culture is all about. Unfortunately I miss the Heiva almost every year because I'm either off in some other country researching a guidebook or because I'm back in California visiting family. This year however I'm broke and out of work so I got enjoy some of these festivities that, in my opinion put Vegas to shame (note that I've never actually been to Vegas but after seeing the Heiva who needs it!).


My good friend Amel is an ex-dancer and Tahitian dance aficionado and she bought us tickets to what she thought would be the best show of the Heiva dance competitions, the Hei Tahiti performance at To'ata Amphitheater in Papeete. The way the Heiva dance competitions work is that there is a first amateur performance by a dance school, usually made up of every race, shape and size of men, women, girls and boys who all enthusiastically shake their hips and waggle their knees. This is the kind of the show most of us locals are used to seeing at parties and restaurants throughout the year - a few trip ups inevitably happen and there's a huge range of talent from the stiff to the future professionals.

Next come the himene singing competitions. I remember finding these a little boring but this year I lucked out since the group was from Rapa, the most remote island in French Polynesia and also the most traditional. A circle is made with a few rows of seated singers in the interior with a ring of standing performers along the outer perimeter. The leader of the group conducts the many Christian inspired yet undeniably Polynesia harmonies that converge to make one forceful, spine tingling melodic creation. In Rapa they use lots of flat notes making the songs at first sound off key but as the ear becomes used to hearing the uncommon combinations, it's impossible not to become completely taken away into the heart of the song. I was so moved by the force of this group, that honestly I nearly started to cry. Amel told me that the music from Rapa fascinates anthropologists since the melodies are considered some of the least Western compositions in the world. There's a fantastic video of this group at the 2007 Heiva at http://www.youtube.com/watch?v=7wH3sI8kT7o.

After the himene come the percussion competition where the group does a few required numbers then some wild improves that make you want to get up and boogie. For some reason the group we saw thought it would be cool to wear these giant plaited coconut palm frond balls over their heads so that they looked like something between the Residents (an eighties industrial music group that wore giant eyeballs over their heads) and swamp creatures. We never figured out why they thought this would be a groovy gimmick but they seemed to be able to play just fine even with big baskets covering their heads.

Last comes the piece de resistance, the professional dance show. Hei Tahiti began with a giant fake smoking coconut center stage out which came the first dancers. The story of the show was about the ancient land division wars in Raivavae (an island in the southern Gambier archipelago) and it was relatively easy to follow what was happening. A beautiful woman danced alone till a man ran in, swept her over his shoulder and ran off with her to a little hut at the side of the stage. When they came out they had a baby - I mean a real baby - and then the wars began. Tahitian dance is always performed in a series of styles from the slow suggestive aparima to the fast hip gyrations of the otea. Costumes are changed several times and in the case of the professional groups these are outrageous confections ranging from simple skirts and bras made of ti leaves to massive, mother of pearl bejeweled head dresses.

I used to always think that the beautiful, graceful female dancers were the star attraction but as I get older I appreciate the men more and more. Everyone talks about how sexy all that female hip shaking is but ladies, a muscular Tahitian man wearing only leaves and scissoring his knees back and forth seriously gets the hormones raging. Some of these guys you wouldn't look twice at on the street but get them on stage in a loincloth and they become beacons of masculine sexual energy. I don't doubt for a second that the women do the same thing to guys in the audience. The ancient Tahitians had a handle on sexual expression that Hollywood still has no clue about - these shows get you at your most base human level.

Hei Tahiti won the dance competition this year so I'm really happy I got to see their show. Now the Heiva is officially over there are still a few performances to catch. I was lucky enough to catch Tamariki Oparo from Rapa who danced in Moorea last weekend and I promise to blog, with pictures about that soon. All the winning groups are also performing at the Intercontinental and Meridien hotels on Tahiti through August so I'm hoping I'll get to see another show I missed at the Heiva.

The Heiva is organized by Tahiti Nui 2000 but Tahiti Tourism (www.tahititourism.com) can help with info about getting tickets for next year's show from around the month of April. Note that the only picture on this post isn't actually from the Heiva (it's from the Billabong Pro awards ceremony) since you need a special (and pricey) permit to shoot photos at the Heiva.
Posted by Celeste Brash at 4:10 PM