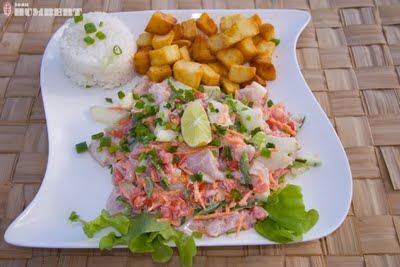 If French Polynesia had a national dish it would surely be poisson cru. While poisson cru literally means "raw fish" in French, it's less daring but tastier than the name suggests. The chunks of fresh fish are first marinated in lemon juice which "cooks" them slightly, are then mixed with fresh salad veggies and lastly doused in coconut milk. I have never met anyone who doesn't like poisson cru, it's on nearly every menu in the country and in a way its flavor defines Polynesia - sweet, refreshing, tender and exotic.

Most of the time poisson cru is made with fresh tuna but it can be made with other fish too. In the Tuamotus it's often made with parrotfish, it can be made with jack fish, halibut or snapper and I have friends in Canada who claim to have made it with fresh salmon with great success. Some people add chopped garlic or ginger but I've found that simpler is better - nothing beats the unadorned mix of lemon and coconut milk.

Take the tuna chunks and soak in a bowl of seawater or lightly salted fresh water while you chop the tomatoes, onion, cucumber, carrot and bell pepper - locals swear this makes the fish more tender. Remove the tuna from the salt water and place in a large salad bowl. Add the lemon or lime juice and leave the fish to marinate for about three minutes. Pour off about ½ to 2/3 of the juice (depending on how lemony you like it) then add the vegetables and toss together with the fish. Pour the coconut milk over the salad and add salt and pepper to taste. Garnish with chopped spring onion or parsley and serve with white rice.
Posted by Celeste Brash at 9:10 PM