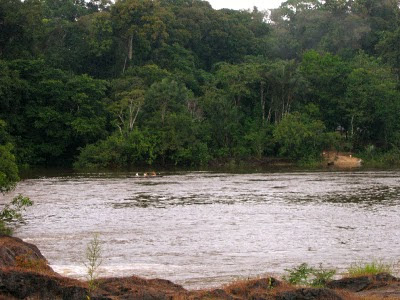 It sounded easy: take a short taxi ride from the village of Lethem, Guyana to the Takatu River, hire a boat to cross the river, then wait for a bus on the other side (Brazil) to go to the Bonfim bus terminal with connections to Boa Vista.

I took the taxi and hired the boat, no problem. On the Brazil side of the river there was a graffiti-covered plywood bus shelter with a crowd of greasy guys and presumably prostitutes hanging around. They all glanced at me when I arrived and wearily put down my pack, but no one said hello despite my hopeful smile. A taxi driver came up and gestured if I wanted a ride. No, I said with confidence, I was waiting for the bus. Soon two men arrived by boat from where I'd just come from across the river, got in the cab right away and drove off.

About twenty minutes later I was still waiting for the bus and was now feeling the gaze of several of the men on me as I uncomfortably sat alone, the only foreigner and obviously a tourist. I smiled at the prostitute sitting next to me and asked her if she knew when the bus was coming. She said "soon," very reassuringly and patted me on the knee. Meanwhile several more groups of men crossed the river from the Guyana side and snagged taxis that were arriving regularly, about every 15 minutes or so.

After about an hour a thought crossed my mind: "No one knows I'm here. I'm at a dodgy border in no man's land all by myself. If some threw me in a car and drove away right now no one would ever know."

A guy who had been hanging out by the taxi area seemed to read my mind and came over to me.

"The bus should be here soon," he said in English. "The one that was supposed to be here an hour ago didn't show up but that happens sometimes." He was friendly. This made me feel better.

So I waited another hour. It was the afternoon now and I still had a long trip ahead of me. Plus I was starting to feeling scared. There were some pretty sleazy people at the bus stop and I knew that I was looking more vulnerable by the moment.

I started planning what I would do if it got too late to get to Boa Vista. I'd have to go back across the river to Guyana but I wasn't sure they'd let me back in without a Brazil stamp in my passport. What would the border guards do with a lone woman at sunset who had nowhere to go and was not legally in any country?

Just then the boat guy who had taken me across the river saw I was still there and came over looking concerned.

"The last bus to Boa Vista leaves at 4 pm!" he said. "What are you still doing here?"

I explained that I was waiting for the bus. He told me to wait a minute then went and talked to several people by the river.

"There's no bus," he said. "The border guards are blocking it from coming in so you have to take a taxi to the border patrol office then hopefully catch a bus from there."

It seemed obvious to me now that I should have just taken a taxi like everyone else and wondered why I had waited so long. Sometimes fear makes us act dumb - I had been in a semi-paralyzed state not speaking the language and being in a spooky part of a new country. Out of my daze, I got a taxi to the border office for an easy $2 and got stamped into Brazil; the bus arrived within minutes and whisked me to Bonfim. At the Bonfim terminal, I managed to hop on the last bus to Boa Vista just as it was pulling away.

The guidebook and all those helpful people had given me the wrong information. At the border office I talked to the guards and found out that the bus was often blocked there and sometimes it didn't run at all. Luckily, I was re-writing the guidebook and was able to change the details in the book. I guess it's my job to find out all these things the hard way - hopefully my bad decisions in the face of fear will save many people the trouble and desperate questioning I went through that day. As for me, I hope I never get stuck at a bus stop like that ever again.

Note: This picture is of the Essequibo River, not the Takatu River. I was too worried about my safety to take out my camera and take a picture at the border! Still, it looked kind of like this but with more people, more boats and a ghetto bus stop.
Posted by Celeste Brash at 9:24 AM