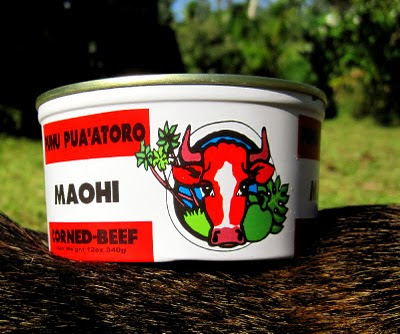 Poisson Cru, a delicate and healthy raw fish salad, is the star of French Polynesian cuisine and most visitors think of it as the country's national dish. Tahitians do eat lots of poisson cru but beyond restaurant menus and within family kitchen walls, the most popular dish in the country is by far Punu Pua'atoro, canned corned beef and Tahiti's answer to Spam.

Chock full of fat and nitrites, Punu Pua'atoro is deliciously salty and addictively tasty. It's also very easy to prepare. At home most folks fry it up in a pan with onions and serve it with roast breadfruit. At picnics the Punu Pua'atoro tin is heated directly in the fire next to a charring breadfruit. In fact, the meat is so linked to breadfruit that I've heard stories of doctors who have told local diabetics and cholesterol sufferers to stop eating breadfruit - they know that if people don't eat breadfruit, they won't eat Punu Pua'atoro either. It sounds nicer to tell someone to stop eating their fruits and veggies than something meaty and yummy.

Punu Pua'atoro in the no-nonsense Tahitian language literally means "horned pig in metal." Even though most people are now aware that salty canned meat isn't really good for them, a near mystical, back-to-the-roots aura surrounds it as a distinctly Polynesian dish. If you eat Punu Pua'atoro you're a local; if you turn your nose up at it, you're kind of an asshole. It's the cool kid thing to bring along on picnics and everyone will nod in approval and take a little whether they like it for real or not. It's ironic that what has become a symbol of island cuisine is made from an animal that hardly exists in Polynesia, doesn't even have it's own real Tahitian name and makes so many people sick and overweight. But there you have it, like smoking cigarettes, sometimes being hip and sensory enjoyment takes priority of over reason.

I happen to love Punu Pu'atoro but eat it only a few times a year, mostly at picnics with my cool back-to-the-roots Tahitian buddies. Yeah, I admit, I care a little about my image but I also do love the salty, fatty taste when sopped up on a piece of hot, chestnut-like breadfruit. I don't buy Punu Pua'atoro and it makes me feel sick every time I do eat it, but I relish those moments around the fire pit, eating just cooked yummy food to the sound of ukulele.
Posted by Celeste Brash at 12:09 PM