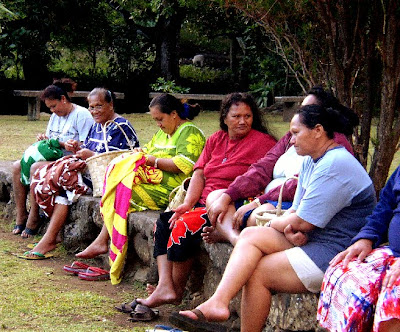 This means "Celeste, you're fat," and I'm frequently greeted this way by female Tahitian friends I haven't seen in awhile.

It's not a compliment. In the past rotundity may have been a sign of beauty for Tahitian women but the Western world has seeped in too deeply and now most people would prefer to be skinny. But the conversation starter has stuck and, unless you look almost sickly thin, or you're a known athlete, people will probably tell you you've put on weight or at least "haven't got any fatter." In a way it's like saying you look healthy and happy even though you're not going to win any beauty pageants.

No one means offence by these comments but I still don't like being told I'm fat. I always get offended -- I can't help it -- but I let it go as a cross-cultural faux pas I'm only aware of on my end.

And this has got me thinking about other similar small talk that Westerners find uncouth.

In Indonesia and Malaysia the classic conversation starter is "Where are you going?"

This question isn't meant to be answered literally although most Westerners don't know that so feel it's invasive.

"Why is it this guy on the street's business where I'm going?" people ask.

It's not, so just answer vaguely with something like the classic "jalan jalan," which means just wandering around.

In the same vein if you asked an Indonesian "How are you?" they'd find it weird. It's a pretty intimate question if you think about it. Why would you casually ask about someone's mental state? It's a big can of worms if you attempt to answer it honestly.

In China common small talk may start with "Have you eaten?" I like this one (perhaps because I'm poria). It insinuates getting invited in for a meal or going to eat somewhere yummy, although it's more of a polite thing to say than attached to any real expectations.

These are just a few and I'm sure there are many more examples of funny conversation starters from around the world. Please leave some in the comments! I'd love to hear from you.