On The Road With a Lonely Planet Author: A Kid's Perspective 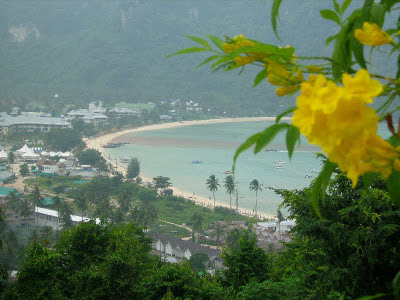 My first guest post to Coconut Radio is by my daughter, Jasmine. This was originally an assignment for her English class (about lying) but I liked it so much I asked her to re-word it a bit for my blog.

Here's her take on what it's like traveling with me:

When I was about ten my mom took me, my dad, and my brother on a research trip with her to Thailand. I had been on many “big trips” before but this time I was deemed old enough to be taken to work instead of being left with dad. I had always wondered what happened in the secret world of my mom’s work so I was quite excited.

Shortly after arriving in Phuket we dropped the boys off at a hotel and, even though we were jet-lagged and tired from the trip, went to research a few hostels before the day was over. The first place we went had a grouchy American expat working at the front desk who was a little too enthralled with a half finished grid of Sudoku. My mom and I went straight up and asked to see a room.

"What kind of room do you wanna see?" grumbled the woman, reluctantly looking up from her Sudoku.

The lady got up from her chair and eyed us curiously. "You girls here on your own?" she asked doubtfully.

As she showed us to the room I caught a glimpse of a cockroach or some other exotic Southeast Asian bug and coughed from the strong smell of cigarettes. When the Sudoku lady finally opened the door to a simple white room lit by flickering neon lights with a bunk bed and a small, glass cube shower, I immediately went and to have a look. I soon regretted my curiosity when a dead gecko that had been smashed in the shower door fell onto my arm and made me jump backwards. The woman hardly reacted, apparently squished geckos in shower doors happened a lot here.

Since I was distracted by wiping the gecko goo off my arm I only caught part of the conversation when the woman asked my mom why we were there.

"My cousin and her boyfriend are coming and they want a good cheap place to stay," said my mom.

"What?" I said from across the room. "When? Are we going to see them?"

"Of course, we're meeting them in Koh Phi Phi remember?"

"No, you never said anything about meeting anyone."

Had I not been tired from the trip, and had that gecko not given me a shot of adrenaline I probably would have noticed the look on my mom’s face.

"Well, you could save yourself some time and buy them the Lonely Planet" said the lady, with the kind of hoarse chuckle characteristic of life long smokers.

"My cousin doesn't really trust the Lonely Planet" said my mom giving me the death stare.

"What? Doesn't she know you wrote it?"

My mom opened her mouth to say something but it was too late, her cover had been blown. The lady tried to be nicer to us by offering us tea and a free night at her hostel but she was obviously quite angry that we had come as normal people instead of with a whole crew of photographers and assistants, which is how a lot of people think guidebooks are written. Neither of us wanted to stay in that place any longer than we had to so when we finally got away from the woman who, was suddenly our best friend. We took a tuk-tuk back to the hotel.

My mom was a little angry with me at first but she said it was alright since she wasn’t going to put that place in the book anyway. The next day we had much better luck with our research and luckily the word didn’t spread about there being a Lonely Planet author on the island.

Posted by Celeste Brash at 3:29 PM