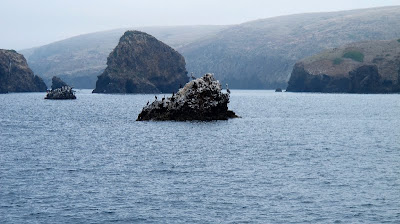 When you fly from Tahiti to Los Angeles you pass over very little land mass. If you're lucky you may peer down at a coral atoll in the Tuamotus about 45 minutes after takeoff but after that there's nothing but clouds and lots and lots of ocean. The first dots that come into view on the flight map as you're approaching Los Angeles are the Channel Islands. When the small yellow specks appear, it feels like an event after so much blue, and their names sound so much more exotic than the big stinky city where you're about to land - - think with a Latin accent: Anacapa, San Miguel, Santa Rosa, Santa Cruz and Santa Barbara Islands. The fact that they're so close to major civilization yet relatively unknown makes them all the more romantic. Ever since I first flew over these islands 20 years ago I've wanted to visit them and I finally got the chance this last Monday.

I went with my mother in law who used to live on a sailboat around the islands in the early 70s when she and my father in law had the first urchin fishing licenses in the region. She hadn't been back since. Her stories of those days involve wild storms, fixing broken rigging while eight months pregnant and plenty of crazy characters. Our day on Santa Cruz Island 40 years later was to be much more mellow.

Instead of a homemade cement-hull sailboat a la 1970, we set out on a modern catamaran complete with snack bar and commentary over the loud speakers. It was cold and foggy at our starting point at Ventura Harbor but the ocean was calm. Pelicans flocked on the rocky breakwater as we puttered out into opaque white nothingness. 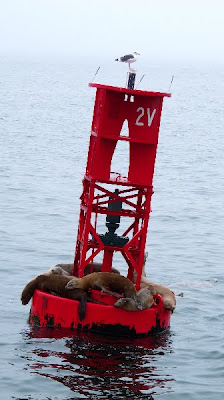 A few minutes out we stopped at a red buoy where a group of sea lions rested while others swam around in the blue-brown silky water. The commentator promised we'd see more marine life before we reached the islands, possibly even whales. Then off we went into the mist.

Despite the fact that I get seasick on just about anything and everything, I didn't feel so bad this day. After about 45 minutes of un-eventful cruising a couple at the front of the boat spotted something that looked like whales. I went outside on the bow and soon saw two large fins surfacing and plunging like wheels in the distance. As we came closer the commentator announced that these were Risso's dolphins. Soon a few more swam near the boat, close enough that we could clearly see the black and white speckled markings covering their torpedo-shaped bodies. The adults of this species are easily ten feet long, with a particularly long dorsal fin. After a few minutes of oohing and aahing we motored away again. 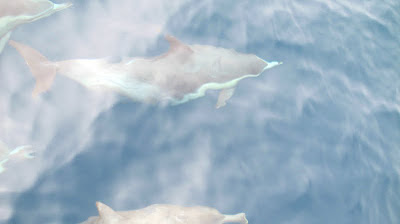 Only a few minutes later we came into a massive nursery pod of common dolphins. Mothers, tiny babies, sisters and brothers all swam over to play in our wake. It was like a giant soup of mammals splashing or gliding just under the surface showing off their streamlined bodies. They continued to follow us as the silhouette of Santa Cruz Island started to immerge from the fog. Pelicans glided over us to rest on a white-stained rock. As we approached the dock at Scorpion Cove, the sky cleared just enough that the sun could reflect on the water exposing kelp beds through the pristine, clear bay - this cove is only about 20 miles from the California coast and yet the ocean is nearly as clear as Tahitian waters. 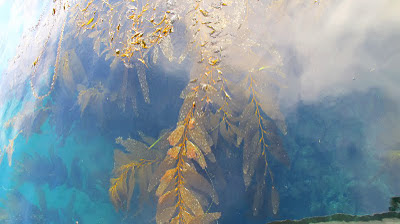 Santa Cruz is the largest of the Channel Islands with 96 square miles of near-treeless grassy hills (the highest peak is 2,000 ft), rocky coves, streams, beaches and sea caves. Now it's a protected area but it was once a cattle ranch and Scorpion Cove is strewn with rusted old farming vehicles and equipment that look like modern art pieces. Before Europeans arrived, the island was inhabited by the Chumash Native American Indians for some 9000 years and you're constantly reminded of this my the shell midden in the trails running all over the island. 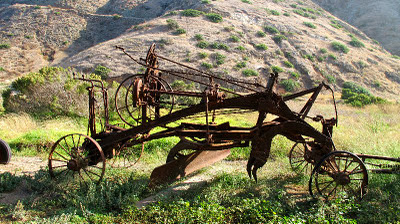 We only had two hours which is far too short to get anywhere on this big island. Like the Galapagos Islands the Channel Islands' isolation means that there are 145 species of plants and animals that are found nowhere else in the world. I can't say I saw any of these, but we did get a good hike up to the top of a dry, grassy hill where the fog cleared letting us see the steep coastline and some of the old farming buildings in the valleys. Down near the dock we picked figs and dodged cawing black crows, mad that we were stealing their fruit. Then reluctantly we got back on the boat. 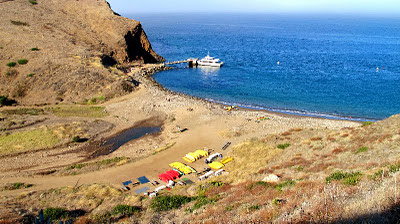 A day trip is lovely but doesn't do these islands justice. Now I want to go back with camping and diving equipment, a kayak and at least a few days to explore. In many ways these islands are what California would have looked like without the effects of development and as an ex-native, this landscape feels like home. Only 250,000 people make it out to the entire park per year making this one of the least visited national parks in the US.

Despite twenty years of dreaming, my expectations of the Channel Islands were met. With their complex history, natural beauty and a near-mystical allure, how could they not?

Our round-trip boat ride to Santa Cruz cost $56 on Island Packers (www.islandpackers.com). For more information about the park go to http://www.nps.gov/chis/index.htm.
Posted by Celeste Brash at 12:20 PM