Tomohon Sulawesi: Home to the World's Most Macabre Market? 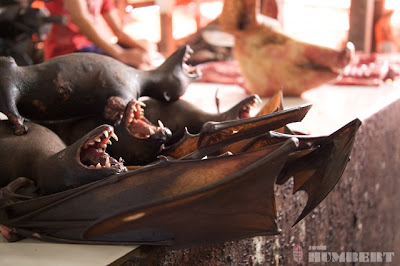 How strong is your stomach? I used to think mine was made of steel but Tomohon's market in Sulawesi Indonesia broke me. It was a horror movie brought to life.

The Minahasans of North Sulawesi are known for cooking up critters from rats to bats and the local joke is that they'll eat anything on four legs apart from the table and chairs. Tomohon's market is a Minahasan center where folks come to from all over the region to buy food and other goods. It wasn't yet in the Lonely Planet and several people had told me I had to see it. I love markets and weird food so I was very excited to go.

The market is conveniently located right next to the mikrolet (mini bus) terminal. Josh and I got off our sweaty little tin can of a bus and wandered through the clothing and toiletry vendors and on to the food starting with piles of fragrant spices, baskets full of chilies and all sorts of bumpy, un-identifiable vegetables. But we browsed these areas quickly, having heard that the highlight was the butcher section.

We smelled the meat before we saw it - a mix of metallic sharpness and old sour stench. We could hear dogs barking, growling and fighting with each other and the humid air quickly became thicker with flies. The pig vendors were the first to greet us, beckoning us to check out their pork legs and heads. Pig heads are of course pretty creepy with their claymation-looking, pale floppy ears and dead eyes, but we'd seen plenty of butchered pigs before living in Tahiti, so they weren't shockingly gross to us. The vendors were friendly, in a hardened merchant sort of way, and we chatted with them asking about what other kind of meat was on sale.

"Too bad you're not here on Saturday," they told us. "That's when the snake butchers come in from the villages. But just over there are the bats and the rats."

Sure enough, across from the pig vendors were tables full of hairless black rats and bats impaled on sticks - their toothy jaws wide open with an expression of dead terror. The butchers behind the tables were preparing more specimens by burning all their hair off with a blowtorch. This gave the animals a smooth charred skin and the whole zone smelled like burning hair. The butchers explained to us that the rats and bats were raw and the hair was removed to make them easier to cook up at home.

"Just slice them up and fry them with onions and chilies," they chided. "And watch out for the little bones."

Meanwhile I noticed that the constant dog barking was coming from small cages near the pig butchers. These wire cages were literally stuffed with some of the mangiest dogs I'd ever seen. They were so tightly packed that the dogs were constantly fighting with each other for every centimeter of space and all of them were as wounded as they were skinny. A few of them looked at us with pleading, sweet canine eyes. It was one of the least humane things I've ever seen; I thought I might cry.

All the heavy smells were starting to make me woozy and I had serious fantasies of freeing the dogs. But to what end? So they could die on the streets? Just then a customer pointed to one of the dogs in the cages so a butcher dragged him out; the dog was yelping and scared but had a slight look of hope in his eyes. With a big wooden bat the butcher whacked the dog two or three times on the back of his head, killing him while all his old cell mates watched silently just inches away.

I looked at Josh.

" I think I'm going to pass out," he said. He'd been taking photos and getting a little too up close and personal with all the dead stinky things.

Silently we left the butchers. As we walked back through the market the smells changed from dead flesh to rotten onions and human sweat - we breathed it in like perfume. By the time we reached the market's fruit section back near the mini-buses we may as well as been in Shangri-la. I've eaten a lot of strange things in my life but after Tomohon I don't think I could ever eat dog.
Posted by Celeste Brash at 9:32 AM