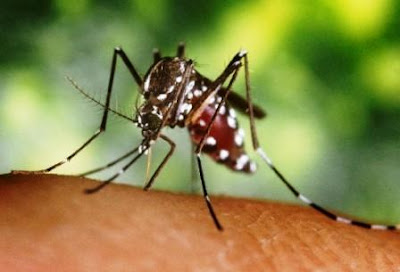 With all the natural disasters going on lately, I admit I'm feeling a bit dark. I promise I'll get back to colorful, fun, tropical stuff on Wednesday but today, two days after the tsunami siren woke me up at 4am, I'm still preparing for the worst. So today's post is about the joys of dengue fever! No, it's not something we like to think about, but it's certainly something we should be ready for.

I've had dengue fever three times, my husband has had it four times and both my kids have had it twice. Nearly everyone I know on Tahiti has had it - not surprising since WHO estimates that there are 100 million cases of dengue worldwide each year. Usually we don't worry about catching the virus since it comes in epidemics, but when we do start hearing about cases, especially in the neighborhood, out comes the tropical strength bug spray. Aedes mosquitoes that carry dengue bite mostly during the day and the mosquitoes get infected by biting a human with the virus. The incubation period is about a week.

Dengue is not subtle. One second you feel great, then a bit cold; within a half hour you have severe chills, feel extremely weak and know you are seriously ill. The fever rises rapidly and your head and entire body start to ache (this is why it's also called "break-bone fever"). At this point I curl up into a ball somewhere dark and just suffer for two to three days. TV sounds awful, your eyes hurt too much to read or even remain open and eating sounds like too much effort. Hopefully there is some caring person around to bring you liquids. My husband once had a horrible strain of dengue that included vomiting and diarrhea. During this particular outbreak the sick children and elderly were airlifted off the atoll (we were living on Ahe Atoll at the time) but my husband had to get through it with just a bucket and me, his loving wife. Luckily I didn't get it that time but I seriously thought he might die.

I've talked to doctors who believe that dengue is more dangerous than malaria, and many articles I've read concur, but once you get used to having it around, it's hard to think of it that way. We know what to look out for: if you start bruising for no reason it may have gone hemorrhagic and you need to get to a hospital; hemorrhagic fever is a potentially lethal complication that spawns from regular dengue. But otherwise, dengue is just something you have to wait out. Drink lots of liquids and take Tylenol for the fever but NEVER aspirin, which thins the blood and can also make the disease go hemorrhagic. Then there's the aftermath - a bunch of my hair usually falls out and once I got severely depressed for a month or so due to chemical imbalances created by the high fever. Dengue is something that requires recovery and I've never seen anyone just bounce right back to normal.

On a lighter note, here's a video from the Cambodian band Dengue Fever who, besides being awsome, have the best band name ever: