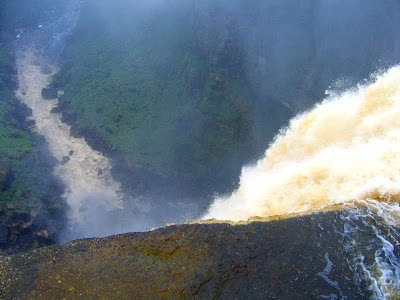 I took this picture from the edge of Kiaetuer Falls - the drop from here is straight down 741 feet (250 meters). On average there are 30,000 gallons of water being shot over every second. Swifts nest in the fall's overhang and at sunset you can watch them dart in and out of the water; stretching away from the falls are swaths of virgin, misty and surreal Amazon Jungle. This is, by far, the most stunning waterfall I have ever seen anywhere, ever.

To get to the falls you have to either hike five days through untamed tropical forest (a dream trip of mine) or do what I did and fly in a chartered 5-seater airplane. I flew in with my father and a two-person documentary film team. The only reason I had the guts to go and stand on this ledge was that the documentary cameraman stood in the same spot and filmed the falls gushing for several minutes.

When my father saw him there he yelled to the other documentary partner, "That guy's got balls!"

To which she responded, "He's got three!"

Yet after the guy had been there awhile it looked pretty safe and not so scary so I slowly inched out to where he had been standing. The water was only up to my ankles and the current at the far side here wasn't strong. I held out my camera to the edge and *snap*.
Posted by Celeste Brash at 6:13 PM

Email ThisBlogThis!Share to TwitterShare to FacebookShare to Pinterest
Labels: blogsherpa, Guyana, Kaietuer Falls, Photo of the Week, The Guianas