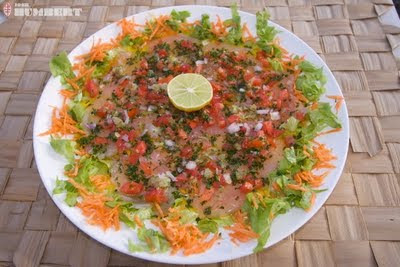 Taken from the idea of beef carpaccio which was apparently created at Harry's bar in Venice in the 1950s, the Tahitian twist of making it with fresh, raw tuna has become such a success that you can find this dish at nearly every restaurant in French Polynesia. Personally, it's an all time favorite of mine when poisson cru feels to rich and sashimi too plain. This is a true fusion dish that takes most of its flavors from the Mediterranean.

As with my poisson cru recipe, you could experiment using different types of fish. I've never tried this dish with anything besides tuna but it could theoretically work with halibut, trevally or salmon.

I find that tuna is more easily cut into paper-thin slices if it's been frozen and thawed slightly. If it's soft it gets gooey and you're slices will be thicker and not as pretty. Lay the slices on a large plate in a rose pattern as you cut them and refrigerate. Chop the onion, tomato, parsley and set aside. In a small bowl combine the olive oil, lemon juice, balsamic vinegar, garlic, ginger and salt and pepper. Remove the tuna from the refrigerator and pour the olive oil mixture evenly over the top reserving about one Tbsp in the bowl. Spread the tomatoes, capers, onions and parsley over the tuna then drizzle the remaining olive oil mixture over the top. Serve with white rice.
Posted by Celeste Brash at 9:19 AM