Mamasa To Toraja Part 2: Christian Politics in a Muslim World 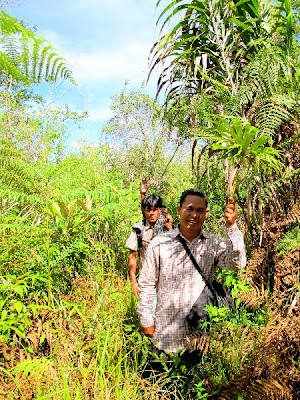 Our trekking guide from Mamasa to Tana Toraja was a Mamasan man named Domingus, which he told us is derived from the word Sunday, "Domingo" in Indonesian. The Mamasa region is known for being staunchly Christian, but because Indonesia is a very Muslim country and this is what both Emre and I were used to, we were more drawn to the fact that "Domingus" sounded Latin, not necessarily religious. Our guide however proved to be much more of the latter.

Domingus was as clean cut a guy as you could ever hope to lead you on a trek. He had a big, round, smiling clean-shaven face, perfectly trimmed short hair with a few strands of distinguished grey and he wore brown dress slacks, a long sleeve button shirt and a guide's vest with an official looking emblem on it. Over the next three days he would wear this exact outfit every day and never get so much as a smudge of mud or a wrinkle in it. He never smelled bad or had a hair out of place. Emre and I would come out the Toraja end of the trip covered in stains, feet encrusted with dirt and hair flying in every direction. I have no idea how Domingus stayed so well put together.

On our first night we saw him put up some political posters around the village we were staying in. He explained that he was a major supporter of the Indonesian Christian party and while he was on our trek he was going to spread the word about his favorite candidate to all the small villages who didn't get much news. That emblem on his jacket - ends up it was for his political party, not a guiding organization. 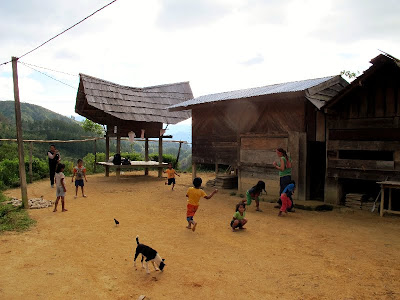 It's interesting to visit Christian areas in Indonesia because the locals immediately assume that white people have the same beliefs as them and therefore, they feel a certain kinship with them. Domingus and all the families we met made this assumption with me. As minorities in their own country (where they often feel discredited and mute) this kinship can be stronger than you might expect. Our group however was a little off kilter because Emre is Turkish and was brought up Muslim. I wasn't brought up anything but because I'm American no one ever bothered to ask me about my spiritual leanings and just assumed I was as Jesus loving as the Mamasans. This suited me fine. Domingus however was immediately a little suspicious of Emre and quietly brought me aside a few times to ask me about how strong a believer she was and if this was going to cause us any problems. Everything ended up happy and peaceful but it was interesting to feel what in Indonesia would be considered a sort of reverse racism. Here I was sticking up for my "Muslim" (Emre is slightly more Muslim than I would call myself Christian) friend in a country where most women wear veils. Emre later confided in me that as a Muslim she often gets preferential treatment in Muslim countries, even getting offered special discounts etc. This was the first time it ever really hit me how different we all get treated in foreign countries because of our perceived religion.

It soon became clear that even though Domingus was a perfectly good guide and knew the area well, his main goal was to spread the word about politics. Luckily, the Mamasans seemed happy to get any news or visitors at all and welcomed the news by promptly posting Domingus's posters all over the place. In fact, they seemed to genuinely respect our guide for bringing them this information. There were a few earnest conversations about the exceptional nature of the Christian candidate but for the most part the villagers were more interested in hosting two exotic white people in their homes than talking politics. 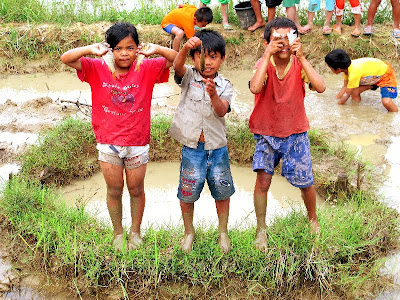 The children had no interest in politics and followed us everywhere. From our first homestay two kids followed us a good half our before the returned home. At the second homestay kids came from all around and hung around trying to keep our full attention from the time we arrived (about 5pm) to nightfall. It was pretty exhausting trying to entertain all those kids after trekking all day uphill through a jungle but they were so sweet and had such good senses of humor that it was well-worth it. Plus we got some great photos and this video:

That night we stayed up till the un-Godly hour of about 10pm in our one room shack drinking sour-sweet palm wine with Domingus, the owner of the house and our horseman (who is worthy of a whole other blog post I'll probably never write). Then to bed on our thick quilts that were supposed to be mattresses but fortunately some warmer blankets this night. We slept well. 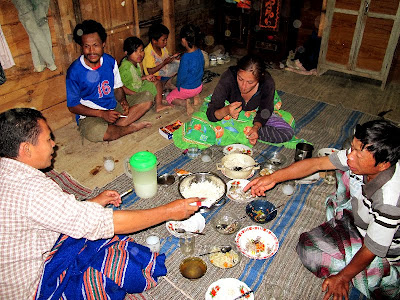 Then the next morning it was off again but this time downhill through rice fields, tiny one-room churches on ridges and villages of small wooden shacks on stilts.