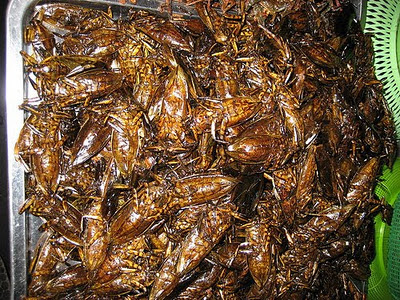 You've heard of Alien vs Predator, now how about sticking some monster food into the ring? Blindfold your cultural bias and see which food wins.

Common ground: Both have a stench that is tirelessly compared to old socks.

In the left corner: Durian. It grows on a tree, needs no preparation or additives and is choc-full of vitamins and minerals.

In the right corner: Camembert. Cheese is old milk that has been digested by bacteria. It's high in fat but also high in calcium and protein.

Common ground: Both are used as insults to insinuate that a person is slovenly and disgusting.

In the left corner: Cockroaches. These bugs can live almost anywhere on essentially anything and can be raised in vast numbers. With 37% protein plus plenty of fatty acids, iron and calcium, they are very nutritious indeed. For cooking ideas click here.

In the right corner: Pork. Pigs are highly intelligent, mammals. Most pork we eat comes from pigs raised in such tight quarters they aren't able to change position through most of their adult life. To reduce infection from the pestilence in which they live, the animals are pumped with antibiotics. Meanwhile the massive amount of waste produced by the animals pollutes the air and may seep into the ground spreading health problems.

Common ground: Both dull your mental state and are used for relaxation and hanging out with the bros.

In the right corner: Kava. A bitter, muddy drink with a taste that improves as your mouth gets numbed by it. It's about the mellowest high you can imagine that's often described as an 'extreme well-being.' It makes you chilled out, no one ever fights. It's so imbedded into some Pacific cultures that a complicated ceremony has grown around it.

In the left corner: Beer. It can taste pretty awesome especially when chilled on a hot day. Ceremonially you say 'cheers' or maybe buy someone a beer as a nice gesture. But it makes some people violent and stupid. I'd hang out with a bunch of guys I didn't know drinking kava, but not beer.

So who won? I'm not about to eat bugs for dinner but I could go for some durian and a beer about now.

Posted by Celeste Brash at 3:59 PM