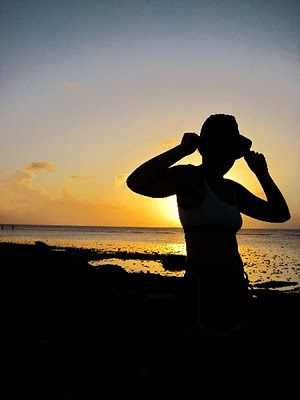 To quickly bring you all up to date, I lived in French Polynesia for over 15 years before moving to Portland, OR in the US this last July. It's been our family tradition to spend Christmas and New Years on our Tahitian pearl farm in the remote Tuamotu Archipelago of French Polynesia pretty much for forever, and this year marked both my husband's 40th birthday (January 4th) and our 20 years of togetherness - so despite being broke, we maxed out the credit card and flew to French Polynesia. I guess that's the American way.

If you read my post Masquerading As Americans, you'll see that we didn't exactly feel like we fit in to the US yet. Yeah the cold was a little offsetting but it was the little things, like all our friends being really busy all the time, having too many choices at the grocery store, people writing thank you and Christmas cards and me feeling disorganized and dumb for not having done the same - these details made and still make me feel like an alien in what's supposed to be my country. I don't understand Americans yet - they are really nice and yet totally unavailable. It's a weird mix of 1950s politeness and 1980s it's-all-about-me.

Being back in Tahiti and the Tuamotus over Christmas made me realize that I'm much more at ease in those cultures than in America. This is a little ironic since one of the reason I wanted to move back to the States was because I was tired of always being the "American" and having an accent in French that instantly gives me away. Well now I see that in Tahiti I'm much more the bomb than in the US where I feel sort of kooky. I make an epic poisson cru (see my recipe), can husk a coconut, know all the plants and how to grow them, am not afraid of swimming with sharks and know how to pick out a good French wine from the dodgy selection at the store. I know everyone everywhere, can live in a bikini and I'm immune to mosquito bites. But I'm still the American, not really a part of either culture, but sort of both floating somewhere out in ex-pat no-man's land.

Does this mean I'm moving back to Tahiti? No, not at all. I've never lived in the US in my adult life so I have to give it a shot. If I'm going to be known as "The American" I at least have to know what that means. Plus it's only been six months. I think it will take a few years to adjust and then, we'll see what we want to do from there. The sun will be beckoning us, I think.
Posted by Celeste Brash at 9:43 AM

Email ThisBlogThis!Share to TwitterShare to FacebookShare to Pinterest
Labels: expat life tahiti, moving back to the US, portland, Tahiti