Voyage to Pitcairn Island: Trying to Get There 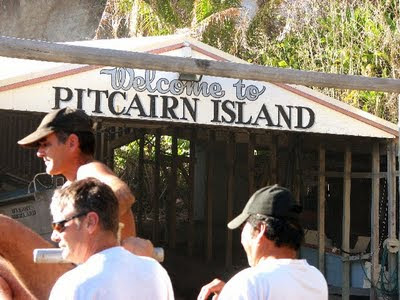 It all started with a Lonely Planet conference in Melbourne, Australia. As part of the schedule, our large group of about 30 authors plus some editors and staff were invited over to the Wheeler's house for dinner and soon I found myself chatting with Tony about some of the very obscure Pacific islands (such as Wallis & Futuna and the Austral Islands) that only he and I had ever researched. When I mentioned to him that I had fantasies of updating Pitcairn Island for the upcoming South Pacific book, his eyes lit up. Soon several of us were around a coffee table gazing at one of Tony's prized possessions, a replica of the Bounty carved by Fletcher Christian's great, great, great, (great?) grandson that he had bought when he stopped on Pitcairn years ago on a north-bound icebreaker ship.

And that was all I needed to get me going. Once I was back home on Tahiti I managed to talk the editor for the South Pacific guide into agreeing that it was high time someone went Pitcairn and that obvious someone was me. It worked, I got offered the job, but I had no idea how hard it was going to be to get there.

I looked for cargo ships and cruise ships; nothing. I looked online for sailboats looking for crew with even less luck. I did find one small vessel that was planning a rustic cruise to the islands but the dates were way outside my deadline. My break finally came when I contacted the Pitcairn home office in New Zealand and the secretary recommended I contact the Braveheart. The ship had been chartered by the British government to bring the school teacher back from holiday, two children visiting from school in New Zealand and an optician to check the islanders eyes. The cost was $5000 return for the 36 hour crossing from the already remote French Polynesian island of Mangareva. It took some needling to get the funds, but I did it and secured my ticket for passage and a three-day visit to Pitcairn Island.

Before I could confirm though I had get permission from the islanders to visit. I had to write a letter stating why I wanted to visit which would be reviewed at a town meeting on Pitcairn and then a vote would be made deciding if they'd take me or not. After some Internet research I discovered that Pitcairners hate journalists. Thanks to Cathy Marks and Dea Birkett, two writers who (within a few years of each other) spent a few months on the island and wrote scathing books about the twisted social set up on the island. Journalists were categorically refused. Luckily I knew that the islanders would probably remember Tony from his visit. My ex-father in law had also spent a few months living with a family on Pitcairn so I asked him to write me a letter of recommendation. It worked, I got accepted and was thus to become the first journalist to set foot on the island since the 2004 sex trials.