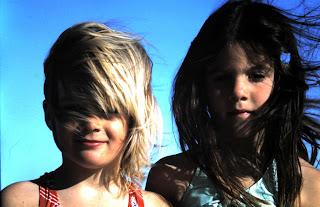 I'm guessing it was 1977. I was about six years old and my parents decided we'd caravan down to Baja in our 4WD for an off-road adventure with some good friends who had three kids around my age. We lived in the San Francisco Bay Area where we'd just moved to the year before from Brighton, England. Traveling half way across the world by plane had been long and boring - I was told that this car trip would be about as long but with lots of fun stops on the way.

Of course my memories are hazy.

We drove a big green Chevy Suburban. It was used when we bought it and already pretty beat up. The back lacked cushioning but had lots and lots of green-painted, cold metallic space. The truck's name was Emmylou II.

Emmylou II had a tape deck and this seemed really high tech to us. We had two tapes for the trip: Stevie Wonder's Greatest Hits and the Star Wars Soundtrack (as in the whole movie on tape). The trip from San Francisco to Baja is around 10 hours so you do the math. To this day every time I hear Stevie Wonder I think about that trip to Baja.

I remember stopping at a rest stop somewhere in Southern California and climbing a tree that had brush-like red flowers and cylindrical nut clusters. I hid in the tree, most likely running away or to Marcus who was my age and who I adored in a bratty, teasing, six-year-old-girl sort of way, and picked off all the round, berry-sized seeds off one of the clusters. Then I probably threw them at Marcus. It was incredibly satisfying. I still love these types of trees. There are lots of them in Southern California.

Then we were in Mexico on the beach. I had a pair of swim fins that I was really excited to try out even though I couldn't swim. My mom helped me put them on and we waded out into the warm brown water. I can still remember how silky and bathtub-like it felt up to my knees. But the sand was more like mud and soon one of my fins was stuck. I had to pull my foot out but the mud just ate up the fin. My parents dug and searched for the fin but we never found it. I was sad about the fin but more than anything I was awed that mud could just swallow something like that. I gained respect for mud.

There were fishermen selling small sharks on the beach and I think we bought one then cooked it on a fire maybe. I doubt I liked it. I was an extremely fussy eater. I remember that urine-like shark flavor a little bit.

There was a small shop near where we were camping and a rotund Mexican woman shopper took a liking to me and fawned all over me. No one in the US did this much so I loved it and my parents did too. While my dad was chatting with her in Spanish I wandered through the aisles of the store and found an open package of . . . Skittles maybe? My parents didn't let me have candy that often so I grabbed the package and slipped them in a pocket. Later my dad asked me where I got the candy.

"Oh that Mexican lady must have given them to her," my mom said.

This worked fine for me so I silently let them believe it. Still I was a little scared eating the candy since in the US at that time there were all sorts of scares about kids getting poisoned by candy given to them by strangers. I hoped the Skittles weren't poisoned but felt they were worth the risk.

Everyone camped on the beach but little girl Jessie, who was two years younger than me, was afraid and wanted to sleep in our truck instead. I said I'd join her because she was the person I liked sleeping next to the most. The first night went well but the second night Jessie got bit all over her face by some sort of bug. The bites were small, red and they itched. Somehow they didn't bite me or maybe I just didn't react to them. Jessie was really little so she kept scratching and eventually she ended up with scabs all over her face. I felt bad for her and was really thankful those bugs didn't get me.

We drove inland over all kinds of crazy 4WD roads with cactuses all around and up and over dry, bristly hills. Near dusk we descended a hill and there it was: a motel. Maybe we all needed a shower or maybe we were lost but the parents decided to splurge to stay there the night. I had never stayed in a motel or hotel before so this was very exciting.

I don't remember the rooms beyond a sort of mildew smell, but there was a swimming pool that was full of frogs. They were so loud we couldn't sleep so my dad had all us kids go out and yell "Campbell Soup!" at them as loud as we could. I don't think it worked (it never has) but I still yell Campbell Soup at noisy frogs.

My last memory is crossing back over the US/Mexican border. We had to wait in a very long line of cars to get to the immigration checkpoints but there were vendors everywhere selling food and colorful souvenirs like piñatas and ceramics. My parents never bought me much stuff, or at least I didn't think so, but here they bought me a big, cartoon-looking ceramic piggy bank. I can't remember anything more about it so it must have broken not long after we got it home. It was brightly colored and would have really stood out in my room.

Overall the way I remember the trip is the sense of freedom. The beach was huge and safe and the other kids and I were probably left on our own to roam around quite a bit. Mexico was warm, salty and had a light sour, flowery smell to it. I think my parents must have given me lots of Cracker Jacks because they too remind me of this trip to Baja. Back home things were still pretty free - this was the 1970s and we lived in the suburbs - but the feel of a different type of air against my skin, exotic smells and the warmth had me hooked. Aside from a few family trips to England my next trip wouldn't be till I was 13 years old and mature enough to enjoy that sense of freedom even more.
Posted by Celeste Brash at 10:34 AM 1 comment: