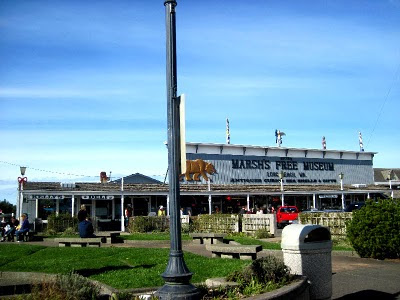 On our last family road trip to Washington we stumbled on the remote town of Forks, the vampire and werewolf capitol of the world (or at least according to Hollywood). So when we packed up for a weekend of clamming near Long Beach I wasn't expecting our trip to rival the freakiness of our previous sojourn. Enter Alligator Man.

After harvesting a bounty of four razor clams near Cape Disappointment and freezing our a***es off all night in a tent, we decided to warm our spirits with a visit to a little museum a friend told us about that held Alligator Man - a disturbing mummified half-man half-alligator that may or may not be real. After driving through a few abandoned looking towns with "For Sale" signs up everywhere we arrived in Long Beach and to Marsh's Free Museum which was bustling compared with the rest of town, with a full parking lot and people milling around outside. Marsh's itself is more of a store than anything else selling tacky tourist magnets, stickers, seashells and knickknacks. The actual museum is crammed at the back and at first glance looks like a bunch of garage sale fodder. 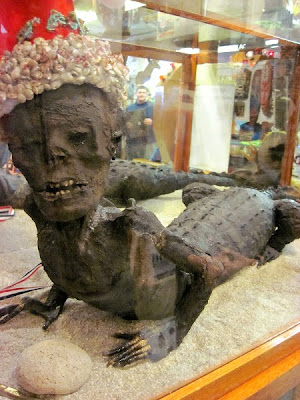 But we'd heard about Alligator Man and by golly we were going to find him. Past the automated 50s style fortune telling machine and a few taxidermy stuffed animals we found him. He's in a big glass display case, is about four and a half feet long from head to tail and is all black and shriveled like an un-bandaged mummy. The head and upper body probably is from a real human - it's too realistic and well done to be a fake - and the bottom half is obviously from a real alligator. There's no obvious area where you can see that the two have been stuck together - it's a brilliant work of taxidermy if anything else and honestly, it's one of those things that you can't really gauge your emotions on. Did the top human half come from a mummy bought in Egypt way back when? Was someone killed or dug up to make this thing? None of these questions are answered, and Alligator Man just sits there baring his spiky teeth with a half-petrified half-aggressive gape.

The funniest part was that even though the museum was packed and Alligator Man was the star attraction, no one seemed to take any notice of him. People casually walked by, stopped to look then moved on. What was going through these people's heads I can hardly imagine: "oh there's a dead human body sewn together with an alligator," or "oh a real-life mutant alien horror movie creature, how nice." And yet, no one gave him a second glance or seemed to register that they were looking at anything odd. 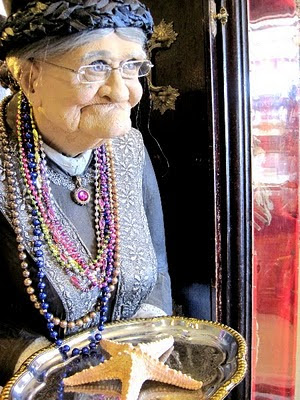 Elsewhere in the museum is an even less fawned upon but very real shrunken human head and an utterly ignored taxidermy stuffed six-legged calf. Most visitors seemed to be there to shop, stocking up on "Beer, it's what's for breakfast" bumper stickers and candy. The freakish stuff was just a sideshow at the back of a room.

Photos by Jasmine Humbert
Posted by Celeste Brash at 6:51 PM No comments:

I studied primatology at University so it had been a long-time dream of mine to see proboscis monkeys in the wild. Bako National Park in Sarawak, Borneo, Malaysia, did not disappoint. A proboscis family was out foraging in the mangroves near park headquarters every morning and there was a plethora of other fascinating critters to be seen as well.


Note: I have a larger article on Bako in the works and I'll post a link once it's been published.
Posted by Celeste Brash at 9:32 AM 1 comment: