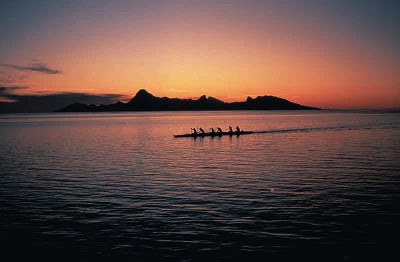 Papeete is Tahiti and French Polynesia's capital city and for years it's had a bad rap of being a polluted, grungy embarrassment to the rest of the stunningly beautiful country. This is changing. I live an hour and a half away from Papeete and go there about once or twice a month so I've had a real perspective on how vastly the city has changed over the last year or so.

The metamorphosis is almost entirely from new landscaping along the waterfront. Several years ago Papeete's lagoon-side road was nothing more than a traffic-clogged concrete strip with fading 1960s architecture on one side and a view of a polluted port on the other. The only saving graces were some graceful old trees that grew in the road divider and the sailboats that docked along the main drag. There were a few dark years during this decade when many of these trees were chopped down and the sailboats were told to dock elsewhere, but luckily this was followed by some brilliant urban planning that has completely changed the face of the city.

It all began with the building of To'ata Amphitheater right next to the lagoon ten or so years ago. A walking area with brick patio stones shaded by frangipani trees was built around this prime theater and a few good restaurants sprung up in the water-view pedestrian only area. A few years later the Vaiete Roullotte area at the other end of the waterfront got a facelift with a little gazebo for live bands, more paved areas, trees and some great public restrooms. This was followed by the building of a fancy new tourist office (with more great public restrooms - much needed in Papeete) and a little crafts market near the Moorea Ferry docks.

But the biggest changes have been recent. The area between To'ata and Vaiete has seen the return of some (but not all) of the docking sailboats and an ever-growing landscaped garden park that includes an enclosed child's play area as well as some lovely spots to sit and watch outrigger canoes glide in front of the setting sun. There are trees, winding grassy areas, paved areas for bikes, trees and flowers. As someone who's seen Papeete through it's worst years, it's hard for me to admit it, but the city is looking very pretty these days.

I hope that the new look will soon spread into the city's interior, which still is crammed with shabby architecture and peeling paint, but the waterfront is where the city's charm was always meant to lie. Now, for the first time in several decades, Papeete is living up to its exotic reputation.