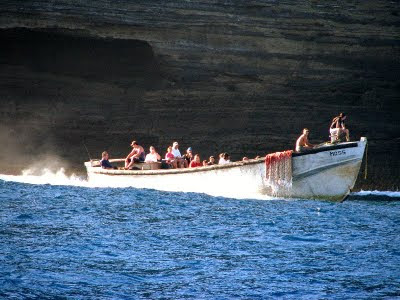 Shortly after sunrise the rest of the passengers and crew came up on deck and we started to pack and bring our bags up from our bunks. Captain Matt radioed the island and within half an hour we got our first glimpse of Pitcairn culture: the longboat, filled with about a quarter of the island's population coming out to fetch us. We could see them from quite far away so it was suspenseful seeing the boat arrive, wondering how they'd accept me as the journalist and pondering what these infamous people of piracy, isolation and sex scandals would be like. My guess was they'd be pretty nice.

The boat arrived and pulled up alongside the Braveheart. Brenda Christian, a bronzed vivacious woman with broad bare feet was the first to hop on board the Braveheart and start to throw our bags and supplies into the longboat. Her 20-something son Andrew, with long hair and multiple hoop earrings, sat at the bow of the longboat and was in charge of hitching the two boats together through the light waves then untying when it was time to go. 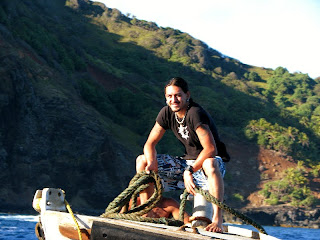 Two older men, with obvious Pitcairn-browned skin and broad faces manned the motor and a few kids and random adults gazed happily at all of us new visitors while some helped pack up our luggage. I'd heard stories about how in high seas you have to literally leap off the side of your ship over big waves into the arms of some pirate-looking local in the longboat. Today however, the sea was calm so, even though it was still a little leap onto the boat and the locals did look like pirates, it wasn't very scary.

A bearded man with glasses who didn't really look like the rest of the locals came over to sit next to me in the boat and introduced himself as Simon; he told me I was going to stay at his and his wife's house. The boat chugged around the rocky outcrop where we had seen the sunrise and we got our first glimpse of Adamstown - or at least the several houses perched on the cliff near the miniscule settlement. Soon we reached Bounty Bay, a small marina (with a big boat shed) precariously jutting out from below the cliffs. As we jetted in I read the large sign stating "Welcome to Pitcairn Island" - unbelievable, I was here, the last remnants of the Bounty were scattered along the bottom somewhere in the vicinity. The air was cool, I felt like I was in a dream. 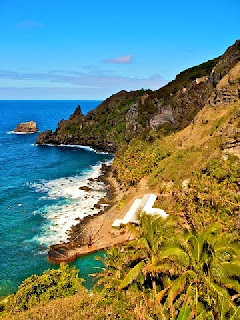 About another third of the population was there at the dock waiting for us on their quad bikes, the main means of transport on the island. Simon helped me get my bag on his quad and, before I had much of a chance to take in the rest of the scene or say hi to anyone, we were motoring up the Hill of Difficulty, which is as steep as the name entails. Then we went through Adamstown, which is made up of a few houses, a complex with a post office and town hall, a tiny store and a prison. The school I'd later find out was on the outskirts of town.

Simon and his wife, who are British and American respectively, run the small community store and are the only non-Pitcairners living on Pitcairn. Their house is on a lovely bluff with 180-degree views out to sea. My room turned out to be a whole house with a living room, kitchen, bedroom and a shower but the toilet was the most rudimentary pit toilet I have ever seen - cowboy-style wooden door and all. Not that I minded. 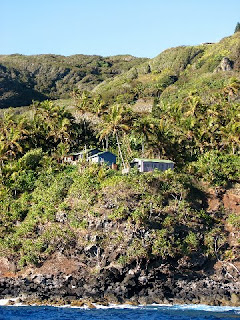 There was a lot to do at the store with all the new supplies coming in so Simon asked if I didn't mind if he left me for awhile. He'd come get me in an hour or so to show me around the island and introduce me to people. No problem, I said, I still felt the boat's motion, was tired and had a lot to take in.

Please click on 'Pitcairn Island' at the right of this page under 'labels' to read my two previous posts about my trip to Pitcairn: Trying to Get There and Voyage to Pitcairn. I'll keep continuing the story over the next few months.
Posted by Celeste Brash at 2:29 PM