Post-Heiva: Better Than the Real Thing? 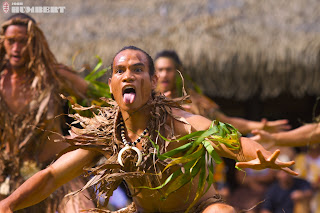 While the Heiva is an over the top, Polynesian entertainment spectacular put on at Tahiti's biggest venue, seeing the dancers perform their acts after the festival and away from the crowds can be even better. Last weekend my family and I took a four-day trip to Moorea and I got to see a post-Heiva show by Tamariki Oparo, a dance troupe from Rapa who won the second place prize at the Heiva dance competitions. Their show had been the talk of Tahiti because of its low-frills authenticity. Most winning acts are put on by professional troupes who practice year-round and have bigger budgets but Tamariki Oparo are a small group of mostly teenage dancers that come from French Polynesia's most remote island, Rapa in the Gambier Archipelago, that has a population of under 500. This means that he 50 or so dancers represent about 10% of the entire population! I had been sorry I'd missed their dance during the festival.

This surprise local Moorea show was at the Club Bali Hai, an old school American-run boutique hotel right on Cooks Bay that I've always loved for its unpretentious sailor's vibe. No advance tickets were for sale, we just had to show up and pay 1000 CFP (about US$12) at the door (my Heiva tickets for mediocre seats cost 2500 CFP). Our kids got in free. There's no stage at Club Bali Hai, just a big lawn next to their little outdoor cafe called L'Ananas Bleu (the Blue Pineapple) squashed between the breezes of Cooks Bay and Moorea's vertical peaks. Apparently Tamariki Oparo had spent the previous week or so performing as a handful of other hotels around the country and this was one of their final shows before going home to Rapa. 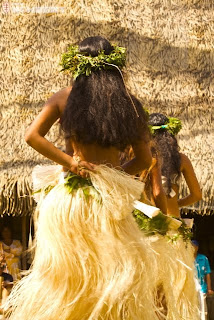 About 150 people were in the audience, many of us just sitting cross-legged on the lawn. We were right in front on the ground, best seats in the house. The leader of the troupe came out first and gave an unusually long opening speech in Tahitian and French and asked the audience to please translate it into English to anyone who needed it. My favorite part of his discourse was when he described how there were really no stores in Rapa but plenty of fish and very fertile soil. "We'll all do great if there's ever independence from France," he said. "But I'm not so sure about all of you." He then told us the story of the up-coming dance: the evangelization of Rapa. This was no surprise since I'd already seen the group's singing act (see my previous blog) and their theme had been much more religious than most. The people of Rapa are obviously quite pious.

The dance began with the whole troupe, dressed in ti' leaves and smeared with mud dancing Rapa style. Now Rapa style is a little different than Tahitian style dancing. Instead of just moving the lower body they wiggle and writhe their upper bodies too making it a little less refined looking but much more fun and energetic. You just sort of want to get up and dance, mud-covered with them. Josh was taking photos and some of the guys were really hamming it up for him.

Next, two of the Rapa dancers sat in a wooden outrigger that they were able to drag along the grass to make it look like they were moving in the ocean. The narrator explained they were out fishing. Next a group of Europeans (actually Rapa dancers dressed in white pants, white and blue striped pants and sailors hats) came up in another boat, kidnapped the Rapa fisherman and took them to Tahiti. In the next act the dancers wore Tahitian style dance costumes (long fiber skirts and bandeau bras) and danced a Tahitian style dance - it was great to see the contrast with the Rapa style. The fishermen get evangelized after some beautiful dancing scenes then go back to Rapa and the mud and leaf dancers again, to spread the word of God. 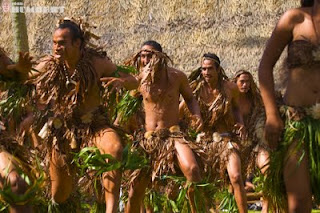 I loved the show but couldn't help but be a little sickened by the irony of the theme. The evangelists banned Polynesian dancing just as soon as they had the power to do so, so the fact that this was a dance telling the evangelization story, via dance . . . well you get the picture. While not historically correct, I do appreciate that the Rapa people are deeply religious and I am happy that nowadays they get to both express their love of God and their prowess in dance.

In all this was nothing like watching the Heiva where you look down on a stage from a large amphitheater and hear everything filtered through speakers. No, this was the real deal with the dancers looking us right in the eye and being able to see them sweat. At one point the star male dancer even lost his skirt and continued on with the rest of the show in his bright blue skivvies. You wouldn't see that at the Heiva. Someday I'll make it to Rapa, one of the only high islands in the country I have never made it to - there's only one boat every two months!
Posted by Celeste Brash at 4:39 PM